What I Took Away From the Library 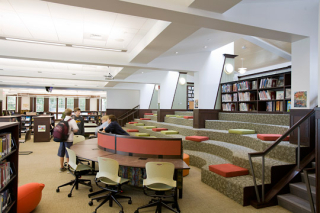 “Minia, you must stay Independent, and not accept help from Maro”

Fitz, you certainly weren’t lying when you said that Adam is the most traveled person that you know, I was blown away by how many countries and places he’d been to. It made my traveling experience look minuscule. But, that being said, the first takeaway I got was how he had grown up in Sudbury, and somehow, his path took him to all corners of the globe. It reminds me somewhat of Telemachus, who started out in his home of Ithaca, before eventually gathering up the courage to forge his own path across the known world. (Which was then pretty much only the Mediterranean and the Middle East/Persia at that time.) Adam did remind me a bit of Telemachus, but that wasn’t my first takeaway. It was how lucky I am.

I know that it sounds cheesy, but seeing his pictures from Uganda and Nepal helped me understand again, that I am lucky to be where I am. Numerous times in my life, I have seen people who are far less fortunate than me. Nomadic peoples in Morocco, or children in Kenya. But, that being said, I have not thought of it in a while, and him talking about it brought me back.

Another thing I took away from the group assignment, was the sabotaging from the other team in the assignment. I forgot what they were called, but I think it was Maro, and we were Minia. We (Minia) were the poor country in this scenario. Our goal was to make a monument to our country, and not accept any help from Maro. We were good at this, despite their tempting materials, but as we got to the end stages of the assignment, an anonymous member of the Maroan group stole our entire monument, this set us back a lot, which was very irksome. It also led to me not having fun during the assignment, since our second monument was stolen, so all we ended up having was our third, which was terrible. I wanted to literally beat up the other team. But self restraint prevented me, and I actually liked the result. We hadn’t accepted help from Maro, and had been successful in our goal.

What I Took Away From the Library

“Minia, you must stay Independent, and not accept help from Maro”